The things people get me doing….

A mate of mine has been nagging me for weeks to make him a roger bleep.

Not just any bleep but the uber annoying peewit that is found in the Hy-Gain V radios.

He could of bought one from ebay but I have fitted them in the past and they never really sounded right even after messing with the components. This one got the thumbs up from the critics on channel 14 in Leicester.

I really should get some etching stuff and knock some pcbs up but time is always the issue. Mind you when the lids on you cant see the stripboard anyway…

Ham International Concorde 2 in to sort out. Service and remove dodgy extra blocks. Fm audio was quiet and lacked any presence. After a bit of looking I discovered D4 the fm mod varicap was missing and had never been fitted at the factory! Sounds much better now. Must have been a Friday afternoon radio 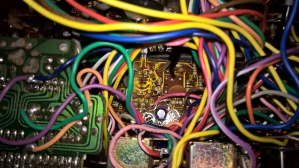